I don’t have an explanation for this.

9. Mercury. Mercury is a sun-blasted wasteland of heat and solar wind, and if you really want that environment, just save yourself the hassle and build your lair in Arizona.

8. Neptune. Neptune is… fine, but it’s basically a less interesting version of Uranus, and if you’re really going for that over-the-top supervillain vibe, why would you settle for the less dramatic planet? You probably couldn’t build directly on the planet itself, seeing as it’s made out of gas, but it’s got some moons to choose from.

7. Venus. Because if your villain brand is heat/fire related, I think you’re pretty much obligated to build on Venus, the hottest planet. You could bake cookies like really fast there, too.

6. Uranus. It yeets itself through space sideways! Great way to confuse the heroes and set yourself apart from other villains.

5. Earth. Earth is also fine, but all the other supervillains have already built their bases there so it’s a little overcrowded.

4. Jupiter. I can’t really decide whether Jupiter of Saturn is better for lair building. It just depends on what you’re going for. Want to intimidate the heroes with a gigantic planet? Make them solve riddles to figure out which moon you’re on? Jupiter is the planet for you.

3. Saturn. If you’re big on aesthetic, I’d recommend Saturn. Very stylish rings, iconic silhouette. It even has the second-largest moon in the solar system, so plenty of space (haha puns) for a dramatic lair design.

2. Mars. Mars’ proximity to Earth makes it a good place to set up shop. On top of that, you can just steal NASA’s secret Mars colony plans, so half the work is done for you. I’d say this is the most practical planet for a lair.

1. Pluto. Most supervillains are outcasts from society, which makes the planet that got kicked out of being a planet perfect. In addition, its distance from Earth makes it the most dramatic, in my opinion. It’s got a cool orbit pattern that sets it apart, and, perhaps best of all, it comes as a matching set with Charon, so though it is small, you can also build on the comparatively large moon.

May all your lairs be extra menacing, and may the heroes always fall into your traps!

I'm a writer, a reader, a digital artist, probably a dictionary pretending to be a human, and, most importantly, a Child of God. View all posts by NC Stokes 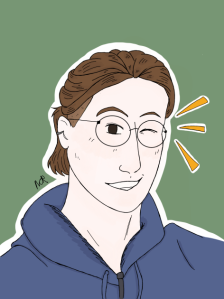 I’m NC, writer-like creature and purveyor of only the finest nonsense. I write about art, spam comments, Minecraft, and any other random topics I enjoy. Please keep your hands and feet inside the vehicle at all times, and enjoy the ride!